Earlier this week I realised that it is 10 years since Study in Style was conceived. I had the idea to create a series of image consultancy training videos, in order to allow stylists the opportunity to train from home.

We were just about to go on holiday and I spent much of the week sat on the beach in Spain plotting out how I could do this…..

I had been providing Face to Face training for 15 years, however I was aware that there were many budding image consultants who wanted to start a style business but who were unable to attend classroom based training due to family commitments, work restrictions or travel issues.

However, I felt that purely book based training wouldn’t be effective.

I knew that I wanted the training to be interactive, visually informative and to include lots of real life examples. And I wanted the at home learners to experience the training in a format that was as close as possible to the face to face training. And I wanted it to be easy to follow and easy to incorporate into their everyday lives.

Video was the answer – but how to do it?

I contacted a number of film companies but the prices quoted for what I had envisaged were WAY out of my budget. I considered alternatives but I knew that these wouldn’t give the same value or education to the trainees. Perhaps it wasn’t meant to be….

Then I was asked to work on a video for the University of Bedfordshire Careers Department – demonstrating how students should present themselves for interviews.

The film crew on this project were 2 recent graduates who had just started their business. We had fun working together and they agreed to film the training videos at a reduced rate over a couple of years as it would give them both experience and exposure. I’m delighted to say that we are still friends and they now have numerous people working for them, with offices in both Luton and London.

They taught me so much about how to appear on camera, what angles work, what lighting to use and they built my confidence when speaking under pressure.

Once we had agreed to work together the hard graft started…

Filming the Study in Style Videos

I found a beautiful, light filled venue that we used to film the majority of the videos. Nikki, a client who lived locally and who had expressed an interest in training was happy to be filmed whilst learning. And I asked one of my existing consultants if she would be my eyes and ears from behind the camera. This was to ensure that everything looked right and that I covered all the training information.

Over the next couple of years we created the equivalent of seven high definition feature films. I prepared scripts, found props, clothes and accessories as well as asking numerous friends to be models, so that I could demonstrate a variety of different style and colour elements. We filmed complete consultations with men and women, a wardrobe weeding session in my friend’s house and personal shopping sessions around the cleaners in John Lewis from 6am – 8am!

Apart from the filming side of things I worked with a brilliant digital marketing agency, rewriting all the training manuals, adding new images and creating new branding. We used the branding on the DVDs, the DVD cases and then there was the Study in Style website to create…..!

Over the years I have also had to learn an enormous amount of technical information. I have had help and support from some great VAs and assistants but I wanted to know how things worked. So that I could update the website, send emails to consultants as well as coach and mentor trainees online. This is in addition to understanding the ever changing world of social media marketing!

I chose to film the Colour Analysis video first because this is the module I would recommend all Stylists start with. It was of course, the most difficult video to create as we had to be aware of so many elements and ensure that the colour reproduction was spot on. This module took over 6 months to complete because we were learning as we went along – however the subsequent ones were much easier to finish!

I sold the first copy of the Colour Analysis Module in March 2010 and the first Image Professional Course in the autumn of 2010. Victoria Lochhead was the first consultant to complete all her training via the Study in Style DVDs.

The highs and the lows

Once all the filming had been completed and the website was up and running the distance learning courses became extremely popular. I was still training people in the original classroom format but was now able to help people around the World learn the skills of image consultancy from their own homes.

Over time I added extra training such as the Business Planning and Marketing module, and The Personal Stylist and Personal Shopper courses.

We of course, had a few disasters along the way with lost videos, badly printed batches of manuals that had to be returned and filming the Personal Shopping module with excruciating back pain.

BUT the biggest problem I encountered was last year when people started telling me that they didn’t have access to a DVD player!!

Luckily the increase in popularity of online learning over the last few years has meant that there are now many more workable options available to small training businesses.

I investigated a few of these options – testing them out both as a student and as a teacher, settling on the online platform Thinkific. Earlier this year we completed the transfer of all the original training video footage to the new Study in Style Training Portal.

The core style training content hadn’t really changed. However I did take the opportunity to update the manuals, add in extra videos, as well as include useful templates and questionnaires. It is now possible to download all the training content and watch it from your computer, laptop, tablet or phone.

I am so grateful that by embracing technology I have had the opportunity to share my knowledge and expertise with so many more people than I would have been able to if I had stayed in the classroom. I have lots of plans for future developments, in order to support my trainees and graduates, so watch this space!

Would you like to discover if working in the image industry would be perfect for you?

Book a no obligation call with me to chat through your ideas.

Continued thanks to Gavin & Alex at Clearhead

Other blogs you may find interesting… 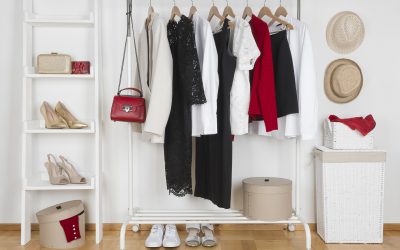 Wardrobe management is one of the favourite parts of my job. I love working in a client's wardrobe, helping them to create order from what was often chaos! I work with them to filter out the clothes that no longer serve them or their lifestyle. This is because they...

How to Become a Personal Stylist

If you are considering how you could become a Personal Stylist or Image Consultant then here are a few ideas..... You have probably read about the "stylists to the stars" and thought “I could do that”. You love fashion and clothes and people always compliment you on...

Questions To Ask Your Style Trainer

Before you invest in any style or image training these are the 10 key questions to ask the training provider. 1)    Has the training programme been audited or certified by an outside body? I’m not saying that a course that hasn’t been certified is bad,...

Discover how Study in Style Training can help you to start, grow and develop your amazing style business.